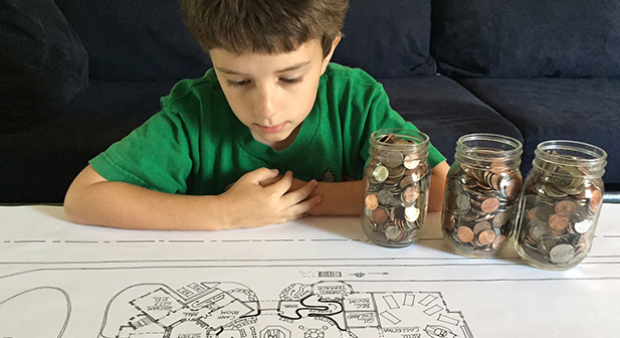 Tyson is one tough cookie.  Many would crumble under the weight of the medical issues he has had to confront lately, but not him!

A recent visitor to the Cave, Tyson had his Mom contact us to ask what we could do for CCF.  We challenged Tyson to fill three Mason jars with coins, and to our stunned amazement, Tyson went out the same day, braving 105 degree temperatures in a wheel chair pushed by his sister Hailey, under cover of an umbrella and filled all three jars!

Not satisfied to stop there, Tyson asked for a still bigger challenge and is now in the process of filling another 24 jars.  What an incredible example to others this young man and his family have become.

Given his funds raising prowess, we have put Tyson on the Design Committee and asked what minor tweaks he could suggest for our plans on Cave 2.0.  He suggested we take the available remaining space and recreate the entire city of Gotham.

I sure hope that kid fills a boatload of jars...

UPDATE: Tyson decided that 24 jars was too easy. His new goal is to fill 1,000 jars by his birthday in October. Holy smokes.