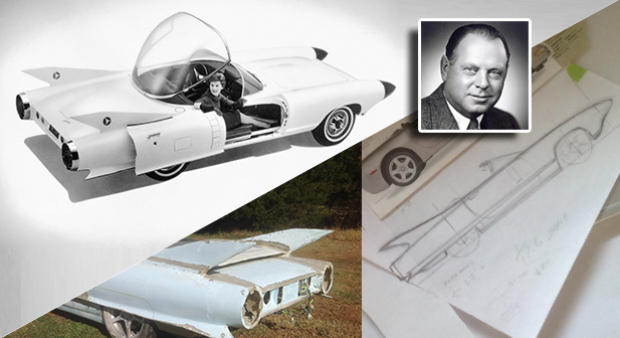 The Fins of the Father

If you can’t yet tell, we have a love of building crazy stuff from a bygone era.  Perhaps our best and nuttiest idea yet is the creation of a car not seen in its’ original condition for half a century!  But first you need a history lesson.

In the 1950s, the Design Department at GM was run by a guy named Harley Earl. Harley was really the brains behind all the over the top lavish car designs of the 1950s. He was, in essence, the father of the tail fin.

His last great project before leaving GM was a concept car called the Cadillac Cyclone, which boasted some of the most opulent fins ever made.  BTW, we dig all things opulent!

After Earl's retirement, he was succeeded by Bill Mitchell.  Feeling the Cyclone was excessive, Mitchell had the tails fins cut off, and replaced with a more subdued style.

In conjunction with craftsman Marty Martino, and with lots of encouragement from the good folks at GM, we are working feverishly to recreate one of the auto world’s greatest lost relics.  Upon completion, we have been invited to bring her to GM’s Design Dome and show her off next to Harley’s last great hurrah.  Our baby has been dubbed “The PsyClone”.  Yes, we intended the double entendres.

Coming to a driveway near you in calendar 2015.